If there’s one thing the Biden administration will be remembered for, it will be jumping from one disaster to the next. And more importantly, failing one disaster response after the next.

At this point I guess we should just expect it, but every time a new problem arises I’m stunned by the incompetence.

Currently, we are being plagued by a baby formula shortage, and it’s causing extreme concern among all families with newborns.

What’s even worse? Check out these responses from the Biden administration with his Dodger in Chief, Jen Psaki…

CBS
“On the formula shortage…you said that this is been something that’s been in the works for several months, mostly through the FDA. When was the first time the President was briefed on the shortage?

Psaki: “I’m not going to get into internal briefings.”

Oh, well thanks Jen. Real big help you are.

That has seemed to be the game plan for these conferences for a while now. Just give vague answers, say that you’ll have to get back to them, and then never own up to any problem ever.

I love this reply in the comments: 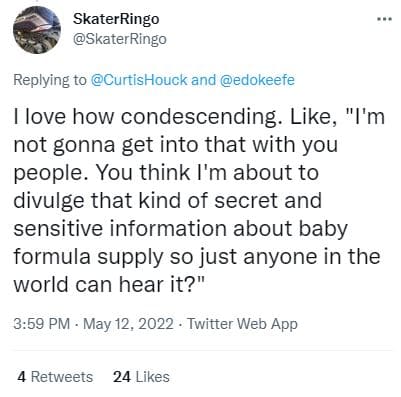 Top secret baby formula. Got it.  What a joke!

TRENDING : Virginia Democrat Just Got Indicted – Adkins Is Charged With 82 Counts, Including Dozens Of Election Felonies

Ed went on to press her with more follow-up questions and she of course gives the most vague answer ever.

“He would have known about this before this week? It wasn’t like this suddenly popped up?”

Psaki: “This is something the administration has been working on for some time now.”

Oh so they have known about this problem for a while now but yet we are still having a major issue with seemingly very little being done about the problem.

Regardless, without a President who has his wits about him I do not think anything meaningful could get done anyhow. I just hope our next President can finish a complete sentence.

TRENDING : Mike Pence Just Took Sides Against Trump – The Former VP Is Flying Down To Support Kemp In Georgia Race

2 days ago
We use cookies on our website to give you the most relevant experience by remembering your preferences and repeat visits. By clicking “Accept”, you consent to the use of ALL the cookies.
Cookie settingsACCEPT
Manage consent

This website uses cookies to improve your experience while you navigate through the website. Out of these, the cookies that are categorized as necessary are stored on your browser as they are essential for the working of basic functionalities of the website. We also use third-party cookies that help us analyze and understand how you use this website. These cookies will be stored in your browser only with your consent. You also have the option to opt-out of these cookies. But opting out of some of these cookies may affect your browsing experience.
Necessary Always Enabled
Necessary cookies are absolutely essential for the website to function properly. These cookies ensure basic functionalities and security features of the website, anonymously.
Functional
Functional cookies help to perform certain functionalities like sharing the content of the website on social media platforms, collect feedbacks, and other third-party features.
Performance
Performance cookies are used to understand and analyze the key performance indexes of the website which helps in delivering a better user experience for the visitors.
Analytics
Analytical cookies are used to understand how visitors interact with the website. These cookies help provide information on metrics the number of visitors, bounce rate, traffic source, etc.
Advertisement
Advertisement cookies are used to provide visitors with relevant ads and marketing campaigns. These cookies track visitors across websites and collect information to provide customized ads.
Others
Other uncategorized cookies are those that are being analyzed and have not been classified into a category as yet.
SAVE & ACCEPT